The first riding lawn mower I ever used was one of those Snapper rear engine riding mowers. These rear engine riding mowers were some of the most popular back when I was growing up and mowing my family’s lawn. These were old school machines that were much better than the push type that made for a long day mowing. Trust me, I have used both. And while these rear engine machines are nothing compared to the commercial machines I now deal with, they were the best option for my family back then. 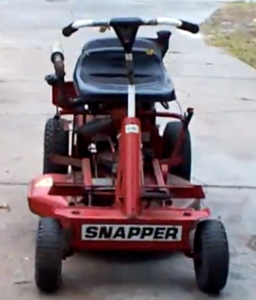 These mowers were built pretty tough for homeowner use. I don’t know how much commercial work you could have gotten from them though. The lawn care industry was not a popular business back then. Except for kids like me cutting a few yards here and there, there was not a big need for lawn care providers. People had more free time and did more yard work themselves. These rear engine riders were some of the most popular in my local area. They were not super fast. To be honest they were pretty slow! But once again, they were a much better option than walking behind a push mower.

Our Snapper rear engine riding mower was a “Comet” if I remember correctly and it lasted many years. I don’t remember my dad doing much maintenance on it either. We used it mainly for our own lawn so it was not like it was overworked. We probably should have sharpened the blade more often. But I was a kid, what did I know at the time?

These rear engine riding mowers had the option of an electric start or a pull cord for cranking. Ours had the cord and I certainly wished it had been an electric starter on many occasions. Pulling a cord to crank her up was not a fun thing when it wanted to be stubborn. It was a used machine when we got it, so it was not hot off the showroom floor.

One issue we had with our Snapper was the deck. It looked well built and for the time I guess it was. But I remember my dad having to hammer out the deck when it would get dinged, causing the blade to hit the deck. That was clearly not a good thing to have happen. He was pretty rough on our lawn mower, so that had something to do with the deck in constant need of “body work.” My dad never met a stump or rock that he didn’t mind hitting with that old lawn mower.

I still see these old school mowers every now and then. They may still even be in production. People have not forgotten them at all though. I talked to a buddy just the other day and he mentioned the same type issues with their deck getting bent up all the time as well.

We didn’t have giant zero turn mowers back then, but we did pretty well with the machines we had. There wasn’t a mower shop on every corner. There were not loads of online retailers to order lawn mower parts from….actually there was no internet at all! But we did the best we could with our old school machines. We worked on them as needed and asked for help from neighbors who were shade tree mechanics for more serious issues.

These mowers were tough overall as many products were back then. I guess that is why you still see them in use. They may look rusty, beat up, and worn out, but if they are still slinging grass, that says something about them. They are not up to commercial grade standards of today, but they would give many modern homeowner mowers a run for their money when it comes to longevity.

what about you? Do or did you have one of those Snapper rear engine riding mowers too? Is it still running? I would love to know if we share the same “good old memories”…..

A Robot Lawn Mower: 5 Reasons Why You Should Not Buy One (Yet)

One of the Best Self Propelled Lawn Mowers: The Lawn Boy 10734 Review

As a lawn mower experts, we review and test the models shown at this webite.

Are you looking for a new mower? Do you want to know which one is the best, the cheapest or the most powerful?

Top 5 Comparison Charts will definitely ease up your buying decision!